When I was 9, my mom joined Figueroa Corridor Community Land trust, which is now known as T.R.U.S.T. South LA. My mom was very involved at T.R.U.S.T. as a founding Board Member. Everyone called her a leader. I remember asking my mom what a leader meant and how you could be one. She told me that being a leader was taking the time and listening to your heart and also speaking for those who feel that their voices have yet to be heard.

Now as a Program Associate at T.R.U.S.T., I am involved in developing leadership in our community. I am involved a lot with the Neighborhood Organizing Committees and the Mobility team. I help out in the office by imputing data, phone banking, creating flyers, and outreaching. The main thing I work with a lot is the Vernon and Main NOC, I make the flyers for the meetings, help set the agenda, and facilitate a bit. Also I am the head person for Lorenzo, I call a lot of the people who applied for the Affordable housing and also talk to them about their experience as they waited to see if they got the apartment. I think my favorite thing that I do is Mobility work because it feels more comfortable to me. 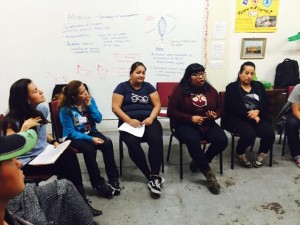 Yesenia, second to right, shares during one of our Escuelita “Methodology School” session.

I am developing myself as a leader as well. Although I am shy and disliked being in front of crowds, I have to learn that leadership comes with practice. TRUST encourages me to Facilitate meetings and trainings so I become comfortable talking in front of a crowd. The way TRUST has challenged me is they make me do testimonies (lobbying) at City Hall even though sometimes I don’t want to. I think the thing that has helped me become a better leader is having the opportunity to go to Sacramento and give a testimony at the Air Resource board. I was challenged to get on a plane, something I have never done in my life, and spend the night 100 miles away from home. Because I don’t like talking in front of large crowds I was very nervous and stuttered a lot. But I think the best thing I got out of it was when the president on the committee thanked me and said what a wonderful speech I had, she told me it was like a story and something she has never heard before. Because of what she said it had me thinking a lot. I thought a leader meant was someone who was fearless, someone who was okay talking in front of a large crowd, and just someone who stood up for their people when no one was brave enough to do so. But what I ended up realizing was that being a leader was willing to take a risk and share their story with others. 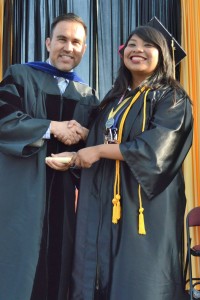 Honestly I have had many opportunities to have the title “Leader”, the things is I still don’t feel like fit into the title. Yes I did decide to speak and be a “Young leader” in my community, and yes I had the opportunity to be Clarinet Sections leader, and did theater to get rid of my stage

fright. I have had all these opportunities to stand up and be a leader but I still feel like I need to learn so much more before I can consider myself a leader. For now I like sitting down and looking other people be leaders so I can watch and learn, because you know that’s growth too. I’m not in a hurry to announce it to the world that I am a leader. I know sooner than later there is going to be something that is going to make me yell at the top of my lungs and say “I have finally blossomed into a leader!”